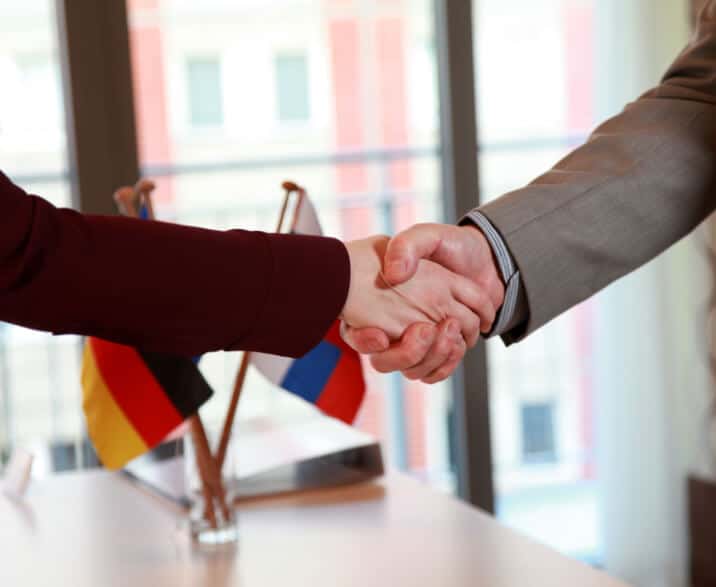 Just send us your documents now and name the desired target language!

We will get back to you promptly with a free and non-binding offer!

Interpretation at the notary office

For smaller and bigger notary matters – from acknowledgment of paternity to contracts for the purchase of an apartment or other property – the notary has to make sure that all participating parties understand every detail of the process. Clients who do not speak German therefore need an interpreter to be able to follow the process and be conscious and informed of their interests. Here, a sworn interpreter is crucial. By taking an oath, the interpreter assures that he or she conveys all negotiations faithfully and conscientiously. We offer interpretations and support by sworn interpreters for all kinds of interpretation at notary offices in Berlin.

If the people getting married do not have sufficient knowledge of the German language, there needs to be an interpreter accompanying the civil marriage ceremony. Since marriage is a legal matter, the interpreter has to be sworn. Thus, the registry office makes sure that all contents of the marriage ceremony are translated faithfully and completely, so the person not speaking German will not be disadvantaged in the procedure. For this responsible ceremonial task, we offer interpretation and guidance by a sworn interpreter. Moreover, we will gladly provide written translations of all the certificates you need before and after the marriage. We can also help you with how to register marriage in Germany.

How to certify a copy of marriage certificate? What do you need to get married in Denmark? Just contact us!

Do you have a doctor’s appointment but you fear your German language skills are not sufficient? Or are you coming from abroad to be examined, get a consultation or be treated in Germany? We will gladly accompany you to doctor appointments and treatments. Our interpreters are experienced in the field of medicine and make sure that the communication between you and medical staff runs smoothly. We pay attention to accurate translation of medical terms, as well as other details. We also support you in all questions concerning medical treatment in Germany for foreigners, e.g. the cost of medical treatment in Germany.

The telephone is meant to make our lives easier, but having to speak in a foreign language can make anyone scared to make a call. This does not have to be the case! Our interpreters gladly support you during phone calls. Multiple formats are possible: we can make a phone call in your name, or one of our interpreters can join in on a conference call. If we cannot be there in person, for example during a hospital stay, telephone interpreting can be arranged as well. Just contact us and we will find a solution!

Interpretation at the bank

Would you like to open German bank account online, or do you have another financial issue? Would you like to avoid misunderstandings due to a language barrier? Precise and good communication are crucial for financial matters – and easy, with our interpreter services for your consultation at the bank! We interpret accurately and competently, ensuring the communication goes smoothly. We can also help you with how to open a German bank account from the US.

The legal system can seem incomprehensible, especially in a different language. For legal matters, you need a competent team of experts by your side making sure your interests are represented. An experienced court interpreter is crucial. We offer responsible and reliable guidance and support by a sworn interpreter for dealing with authorities and courts. Moreover, we handle the certified translation from German and other languages of your legal documents. Do you need a certified translation English to Spanish? Just contact us!

We are happy to travel from our office, located in the center of Berlin, to interpret at any occasion or event. We have competent, experienced and personable interpreters who can help you with everything from finding a school for your children or a German language course, to accompanying you to the doctor or getting a power of attorney, all the way to negotiating a contract of sale. Our team comprises mainly interpreters for Russian, German and English, but other language combinations can be arranged as well. Added to that are additional services, for example supporting you with consular matters at the Russian embassy, applying for apostilles and certifications, and many others.

Are you getting married in Denmark? Do you need a divorce in Germany for foreign people? We’re happy to help you!

Would you like to start your own firm or are you already part of the dynamic start-up scene in Berlin? Your success in international business hinges upon clear and trusted communication with your business partners. Get expert support from our interpreters to make sure business negotiations and meetings run smoothly! Besides interpretation and facilitation of your business meetings, we also offer support at government offices and business planning services, e.g. getting a tax id number Germany.

Trade shows present an excellent opportunity for direct, personal contact, which is essential for building trust and closing deals. But what can you do if there is a language barrier blocking the way to new clients and business partners? You can consult professional interpreters to make sure you are not missing out on the many opportunities of trade events! Our competent interpreters ensure smooth communication at trade shows, fairs and various cultural events.

I have been a loyal client of Galina Loheit for about 10 years now. I am always extremely satisfied with the service as well as with the quality of each translation. The relevant authorities have never had objections, either. Galina is very competent regarding the requirements for translations in Germany and Russia. I can strongly recommend her.

Price and performance, both very good: I simply sent my diploma online and received a cost estimate within 2 hours. It was very important for me to get a certified translation that is recognised everywhere in Germany as I wanted to apply in different federal states. Everything worked out perfectly! Very recommendable translator, thank you as well for the consultation!

I can only agree with all the positive experiences: super quick response, online order and express translation. My certified translation was in my mailbox in no time. The price was decent as well compared to similar companies. Thank you, Frau Loheit, for your great work and quick communication.

I can only recommend Berlin Translation Center. They have translated our marriage certificate very quickly. Ordering online can be done very fast. They have worked on the translation swiftly. I was surprised by their straightforward procedure. I could pick up the translation at the office in Berlin-Mitte without an appointment. All in all, I am completely satisfied, and I can highly recommend their service!

I commissioned the translation of German contracts into Russian. The job was completed quickly and diligently. They have asked for specific terms, abbreviations etc. in advance which guaranteed a faultless translation. That saves so much time! The delivery was very quick as well so I could hand in the translations on time. I can 100% recommend BerlinTC!

Just send us your documents now and name the desired target language!

We will get back to you promptly with a free and non-binding offer!